Adam Rudolph's Go: Organic GUITAR Orchestra
Celebrates the Release of Its Debut Album
-
Turning Towards The Light -
with shows featuring
Ten All-Star Guitarists
in Baltimore, Philadelphia and Brooklyn
from November 21-23, 2015 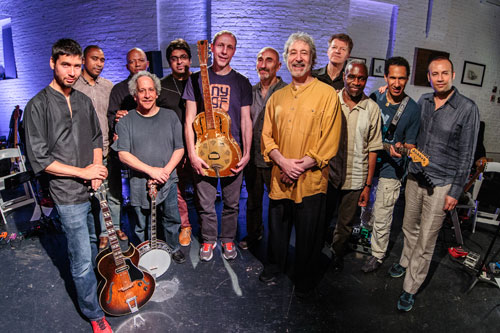 Based in NYC, Adam Rudolph has long been a key figure in the jazz and world music communities, working both solo and in long-term collaboration with such renowned musicians as Yusef Lateef. A composer, bandleader, and percussionist, he is deeply immersed in hybrid music and interactive live performance using written and graphic charts and conducted improvisation. For the last 14 years, Adam has gained widespread acclaim for his Go: Organic Orchestra, which features a variety of classical, ethnic and modern instruments. Described by the New York Times as “A visionary large performance”, The Go: Organic Orchestra's live performances are legendary. In 2014, Rudolph assembled a new, all-guitar version of Go: Organic Orchestra and went into the recording studio.

On October 2, 2015, the Guitar Orchestra's debut album, Turning Towards the Light, was released on Cuneiform Records. You can listen to/purchase this album, on Cuneiform's Bandcamp page: https://cuneiformrecords.bandcamp.com/album/turning-towards-the-light

Adam Rudolph's Go: Organic Guitar Orchestra concerts are certain to rank as one of 2015's best shows, featuring genuinely original, captivating and interactive performances. In concert with his Guitar Orchestra, Rudolph will weave his all-star guitarist’s respective styles and tones into a lush and complex sonic tapestry before the audience’s eyes. Whether you love guitars, or orchestras, or beautiful contemporary music that defies single genres, these shows are not to be missed.

We look forward to seeing you at these very special concerts!

Any help you can give to spread the word about these shows is greatly appreciated. 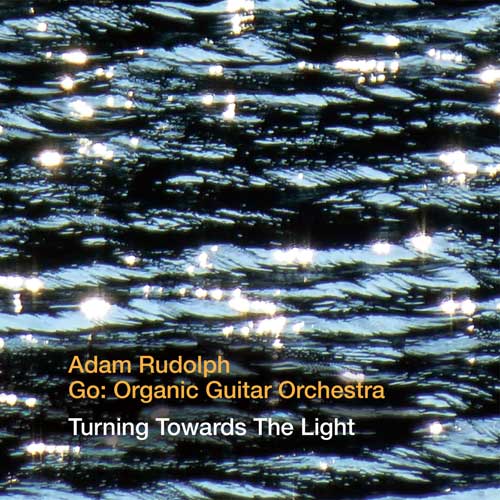 
On the Winter Solstice of 2014 – the Northern Hemisphere’s longest night of the year – composer, bandleader & percussionist Adam Rudolph convened 11 of New York City’s finest and most adventurous guitarists in a New Jersey studio for a most auspicious event: the debut of Go: Organic Guitar Orchestra, his all-guitar orchestra.  In attendance were guitarists Rez Abbasi, Nels Cline, Liberty Ellman, David Gilmore, Miles Okazaki, and Marvin Sewell, all on electric guitars and effects; Damon Banks on bass guitar; Marco Capelli on acoustic guitar, effects; Jerome Harris on electric guitar, electric bass guitar, and lap steel guitar; Joel Harrison on electric guitar and national steel guitar; and Kenny Wessel on electric guitar and banjo. Rudolph had assembled an all-star orchestra; each of these remarkable guitarists were composers and bandleaders in their own right, with a collective musical experience that spanned a universe of contemporary music, from Wilco to Cassandra Wilson to Ornette Coleman and beyond. The studio’s atmosphere on that dark November night was electric. With Rudolph at the helm, an antenna conducting musical charts and creative improvisational energy, the orchestra began to play.  The result is this extraordinary release, Turning Towards the Light, the dawn of Rudolph’s visionary, all-guitar “Future Orchestra” and his first release on DC-based Cuneiform Records.

Turning Towards the Light is the 10th release in Adam Rudolph’s series of recordings for Go: Organic Orchestra, a concept for “new” global/creative orchestra that he began developing in 2001. His previous 9 recordings for Go: Organic Orchestra, released on Meta Records, featured an array of instrumentation to bring to life his rhythmically unique creative music. But for Turning Towards the Light, Rudolph envisioned a new kind of orchestral sound conveyed by a single instrument: guitars, whose strings, coaxed by the right hands, are capable of unleashing an orchestra of different musical sounds. He says: “I try to do something new with each performance and recording. This time I wanted to experiment with a new kind of orchestration. I felt that with their range of sound and rhythm, these 11 electric guitars could generate a sonic palate that had never been heard before. I was looking for a new kind of “Future Orchestra”  – and I think we found it.”

Rudolph grew up and began playing music on the South Side of Chicago, performing with artists like Fred Anderson. By 1978 he was touring Europe with Don Cherry. Hailed by the New York Times as “a pioneer in world music”, in 1977 Rudolph began his collaborations with kora player Foday Musa Suso, followed by his work with the Gnawa musician Hassan Hakmoun, L. Shankar and other musicians from around the globe.  His longest and most significant collaboration was with the great Yusef Lateef; from 1988 until Yusef’s passing in 2013 they performed as a duet and collaborated as composers on many large ensemble projects. “Even when I started focusing more on my own music projects in the early 1990’s, I would always make the time to tour and record with Yusef. I learned so much from him not only about music, but how to live a deeper more spiritual life.”

Since 1992, Rudolph’s primary outlet for his unique compositional vision has been his Moving Pictures ensemble. But in 2001, he founded Go: Organic Orchestra to expand his instrumentation. “I had always been interested in the idea of an orchestral concept of world music, and fascinated not only with the sounds but also with the organizing concepts that structure orchestrations from around the world. …the colotomic structure of Javanese Gamelan or the thematic fibers of a Bantu drum and trumpet orchestra are all valid ways of organizing orchestra. At the same time my approach to orchestra comes out of my work since 1974 in electronic music.  With Go: Organic Orchestra, I feel the resonance of iconic electronic music composers such as Pierre Schafer, Stockhausen or Subotnick. And of course I am, like many creative musicians today, a student of the great 20th Century composers of the European tradition – Messian, Carter, Ligeti, Bartok and my personal favorite, Toru Takemitsu.” 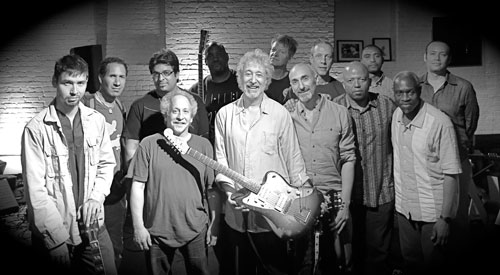 Rudolph has integrated and transformed these influences into a highly personalized language, a language whose rhythmic component, which he calls “Cyclic Verticalism,” combines polyrhythms (from African music) and rhythm cycles (from Indian music). Rudolph’s Go: Organic Orchestra has performed worldwide at music festivals and served residencies in such countries as USA, Turkey, Mexico, Italy, Finland, Denmark and Norway.

Rudolph’s process is more egalitarian and community driven than the top down structure of Western orchestra. “My idea is to get the most structural and aesthetic focus from the music with the least amount of reading. I want the musicians to bring their own voice, feeling, and phraseology to the music. In a kind of “de-composing” process, he creates graphic scores that consist of what he calls “pure elements” – “Interval Matrices,” “Cosmograms” and Ostinatos of Circularity”. Add to the process Rudolph’s unique conducting method. “Through trial and error I have invented my own way of conducting. As with the score, I wanted my conducting to yield as much interpretative range as I could get with the fewest, simplest and clearest gestures possible. I think of my conducting method as being more related to the idea of something that conducts electricity than someone who is always leading. When I begin a concert, I don’t know what is going to happen, how the music will unfold. After my initial gesture, as I hear the first sounds of the orchestra I follow the feelings and ideas of where the music flows. But we are all PREPARED due to deep study of the elements in the score. So the score, the musicians and myself as conductor, we all dialogue in a process which I consider “organic.”

With the Go: Organic Guitar Orchestra he moves the idea of what an orchestra can actually BE resolutely into the 21st century. He states: “When you generate new creative processes, the result will be prototypical art.” On Turning Towards the Light the 11 guitarists sound in turn like a futuristic string section, percussion group, woodwinds, and brass. Rudolph says that his NOT being a guitarist was an advantage in leading this project. “Since I don’t play guitar, I don’t really think “guitaristically,” I’m thinking compositionally and percussively. Perhaps that led us into some areas we might not have gotten to otherwise. I have to say also that these musicians were so incredible – they were so generous in letting their virtuosity serve the musical moment. They played with so much imagination and soulfulness. I am grateful.”

Go: Organic Guitar Orchestra is a natural evolution for Rudolph’s orchestral vision. The music asks to be heard on its own terms; its unprecedented sounds and formulations invite the listener to set aside their preconceived ideas and expectations. Rudolph adds: “while I was mixing the recording I felt the music itself was so new that is was teaching me HOW to listen to itself. The act of listening to it became a creative activity. I think there are still people who like to engage music that way.”

To celebrate the release of Turning Towards the Light, Go: Organic Guitar Orchestra will be playing shows in major cities along the East Coast, in venues including Roulette and Ars Nova. The all-star guitar orchestra is also available for festival bookings worldwide.

PROMOTIONAL TRACK //
If you'd like to share music from this release, please feel free to use the following track:

Posted by Cuneiform Records at 12:53 PM